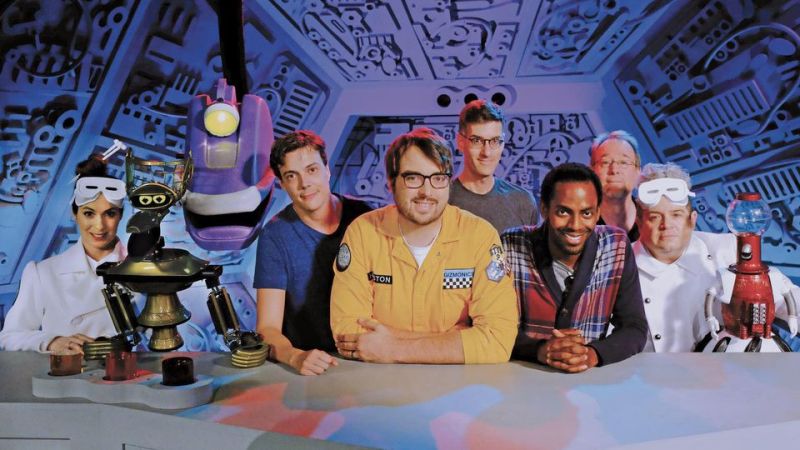 Before the full season drops on Netflix next week, Kickstarter backers received an advance streaming screening of the season premiere (pilot?) of the new Mystery Science Theater 3000.

I’ll keep spoilers light in case you are trying to stay fresh for the new episodes.

Full disclosure: I’m an original fan of MST3k, with a preference for the Mike Nelson hosted episodes. I’m not a Joel hater by any stretch (he’s the creator for goodness sake) and happily cite “Monster A Go Go,” “Manos: The Hands of Fate,” “I Accuse My Parents,” “Eegah,” “Mitchell,” among others as personal favorites. But the sensibility of the Mike episodes was a little more mature, both in content and in the characters’ personalities, so it was a fully formed show by that point and the riffing was stronger because they had it down to a science by then.

For the uninitiated, the show premise is the same as it ever was: a mad scientist traps a man in space and subjects him to bad movies to torture him (Mike), find the worst one to take over the world with it (Joel/Mike), or get better ratings (Jonah, I guess?). He’s joined by robot pals, Tom Servo and Crow T. Robot, and they make fun of the movies sent their way.

The new show concept is blissfully unaltered in that way. Comedian and internet personality Jonah Ray is the new host, comedians Hampton Yount and Baron Vaughn are the new Crow and Tom, actress Felicia Day, of Buffy and Supernatural fame, is the new mad scientist, Kinga Forrester, and actor/comedian Patton Oswalt is the new henchman, TV’s Son of TV’s Frank.

The pilot opens to show us how Jonah has been captured and segues into the new theme song and then dives into the episode like any MST3k begins. It was a cute, maybe slightly too precious sequence featuring a few cameos including one original cast member cameo that, jarringly, went unexplained. The production values, while still mostly kitschy scale models and strings, are more polished here than the original series and feature more green screens. There are also a bunch of cast extras around which is a change from the “intimate,” sometimes “claustrophobic” feel of the original series. Even the MST3k movie, which had a bigger budget, still focused only on Mike, the bots, and Dr. Forrester. Here, there is a villain band that plays at “commercial” breaks and it’s certainly different, although not necessarily unwelcome. The movie is Reptilicus and is a classic MST3k-type film, so solid on that front.

But the first thing that struck me was a sense that series creator, Joel Hodgson, is reclaiming his show after leaving under contentious circumstances halfway through the fifth season in 1994. Since then, Joel has seemingly made peace with the departure, but watching this new version of the show makes me think he’s working out some of his issues and unapologetically reclaiming his creation.

For one, Jonah Ray works for the Gizmonic Institute, which is where Joel and the Mads worked in the original series. After Joel left, the institute disappeared from the show as it was Joel’s IP. Second, the invention exchange has returned—Joel’s stand-up comedy featured hand crafted inventions sort of like a prototype Carrot Top routine. The inventions only survived a few episodes into the Mike era before they were jettisoned in favor of more “life on the satellite” bits and random skits that kept the story moving forward more smoothly. Third, and this is more of a feel thing, the episode’s sensibility and riffing more closely match that of a, say, third season episode. There are some sharp third season episodes to be sure, like “Pod People” and “Cave Dwellers,” but the show was still finding its feet at that point and the riffs and skits sometimes feel detached. Even though the show was scripted and they were trying to create the feeling that the characters were spontaneously reacting to the movie, it wasn’t until the later years that the characters felt truly embedded with the movies and like they were in a theater being forced to watch them. In this new episode, the riffs feel too polished and the characters seem detached from the movie. There’s also quite a bit of silence and a dearth of riffs at some points. Even if the characters just made sound effects, sighed, laughed, or muttered to one another, in the original show’s best episodes the silences were usually filled with something interesting. That’s missing here.

Finally, the new show completely ignores the original series conclusion. Or at least it appears to. At the end of the original show, Pearl Forrester accidentally puts the Satellite of Love into reentry mode and Mike and the Bots escape the crash to live together on Earth continuing to watch bad movies on afternoon TV. In this new series, Jonah is put up on the Satellite of Love with Tom and Crow with nary a mention of how they got back up there. I’ve already seen some fans question this and the series’ staple response of “It’s just a show, I should just relax” being used to repel the question. But that doesn’t do it for me. It feels like Joel is taking back his show and ignoring anything inconvenient or which he doesn’t like.

While, yes, this is a show with a guy shot into space to watch bad movies with human intelligent robots, MST3k always had a pretty solid story continuity that they referred back to often:

Given how nice of a swan-song MST3k’s original finale was, it’s jarring to see it just casually ignored. I would have preferred just a brand new reboot if they’re going to do that. Given how much time went into Jonah and Kinga’s introduction, I don’t see why there couldn’t have been some attention paid to the series’ original closing. Even if it was as simple as noting that these are duplicate bots and a duplicate satellite. That would have been more satisfying and respectful to the original series legacy and solid finale.

I’m an original MST3k fan. I can’t hide it. I also won’t apologize for it. My initial reaction to the pilot is mixed.

The series concept is as solid as it ever was—making fun of bad movies. Clearly, a lot of care and attention has gone into the new series from the writers, performers, and set crew. The riffing was serviceable; not “The Final Sacrifice,” “Mitchell,” or “Space Mutiny” levels, but certainly not the worst. And it really does seem like the writers and performers have tremendous upside. I mean, Dan Harmon is one of the writers!

But I’m bothered by the omissions to the new story as they pertain to the original series ending. It’s a complaint only a fan would have and even maybe only a complaint a Mike-biased fan would have. Joel seems to be trying to restore MST3k to the pre-1994 version that he hosted. He’s the creator and he drove the revival effort. But I think he may be forgetting that many MST3k fans came onboard during the Mike years and after through DVDs that were initially heavily weighted by Mike episodes. Discounting that fan base and perspective is dangerous because Rifftrax, run by Mike Nelson and featuring Kevin Murphy and Bill Corbett, exists. If these new episodes don’t measure up, fans have alternatives including just re-watching old episodes.

As a fan, I want MST3k and movie riffing as a genre to continue. I’m skeptical after what I saw in this premiere, but encouraged enough to continue.